In the period waiting for university examination results, university prices differ all around the world and in Turkey. For study abroad, the cheapest country is Kazakhstan with 4.500 dollars and the most expensive one the US with the 38.000 dollars.

Akare which organize fairs for study abroad published a paper named “Research on the Cost of Studying in Abroad”. According to this research, they look into 38 country’s universities, accommodation, and living expenses and according to this the most expensive country is the US.

In Kazakhstan, a university’s annual tuition is 4 thousand and 500 hundred dollars

Annually tuitions of universities’ in Bosnia Herzek is one thousand, in Georgia and Ukraine are 2 thousand 500 hundred dollars. Students who want to study in these countries must spend 5 thousand dollars.

In Norway, annually university tuition is at least 200 hundred dollars

When we look at just education tuition level the US is with 23 thousand dollars most expensive and Norway is with 200 hundred dollars cheapest country.

Norway where the university prices are cheapest is followed by mostly European countries. The tuition fee is calculated in France 250 dollars, in Kazakhstan 500 dollars, in Germany 550 dollars, in Italy 800 dollars.

Nazım Özsoylu who is the Akare Study Abroad Fair Board Member answered the AA reporter’ questions. He said that; studying abroad is different from country by country but contrary to popular belief it is not more expensive than a private university in Turkey.

In Turkey when getting an education from a private university you will also be paying for extra things like transportation, food, pocket money. If a student is studying in another city accommodation will be an important cost. Özsoylu said:

“Also, a total of annual costs are approximately the same, in fact Europe is more cost effective. Besides these, there are many reasons for study abroad. Student can start university without examination stress, can study any branch what she/he wants so can successfully her/his occupation, in Europe can graduate under the 4 years and can learn the second language nearly her/his mother language. While costs are high in the US, England, Australia and Canada, in Europe, Germany, France, Austria and the others cheaper. And in East Europe, in countries like Ukraine, Hungary and Poland are in demand.”

Özsoylu said, except Germany and Austria other countries don’t stipulate any university examination, like LYS or YGS. “However, when you come back to Turkey, for the equivalence of higher education council either you must have educated in one of the first 500 universities in World or must taking national university exam and must meet condition minimum.”, he said.

Education cost according to countries

According to Akare’s survey, the countries annual education tuition, accommodation and living expenses are: 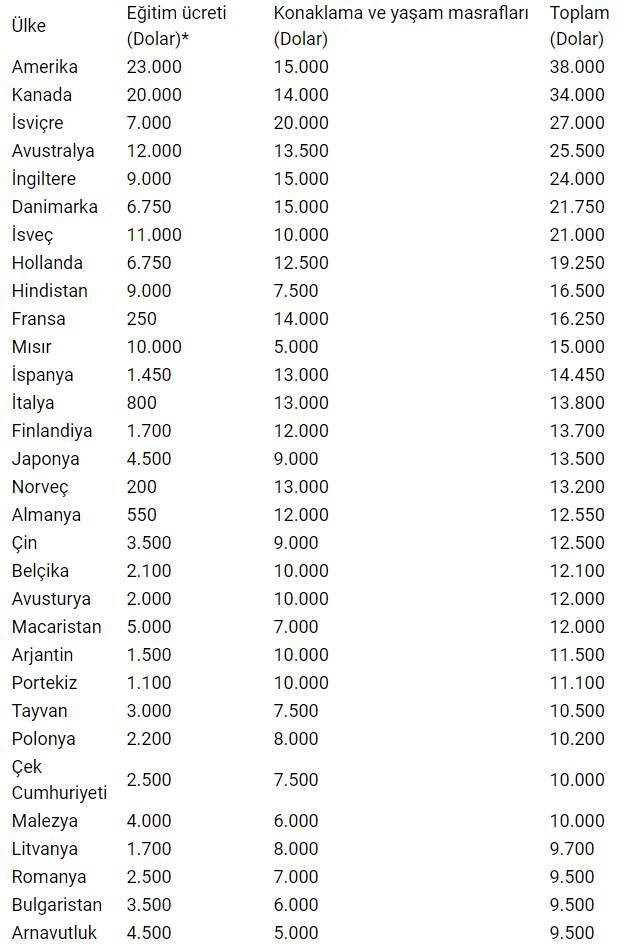