The World Happiness Report, published annually by the United Nations network for Sustainable Development Solutions, is published. The 2020 Report ranked the world’s happiest cities for the first time.

While education is at the top of the sectors most affected by the coronavirus pandemic, it caused the education dreams to be delayed for a while for international students who want to study abroad. However, in this process, many educational institutions and governments that offer online options are trying to help students overcome this troubled period by producing solutions for them.

Thinking that the days we live in will end soon, we prepared an article that will make your face smile a little and inspire you to continue where you left your dreams. World Happiness Report 2020, published annually by the United Nations Sustainable Development Solutions Network, has been published in recent months. The report, in which the criteria such as life expectancy, GDP, social support and freedom of 156 countries were examined and published, was first launched in 2012.

This year, Finland remains at the top of the list as the happiest country in the world for the third time in a row, followed by Denmark and Switzerland. The biggest surprise of the 2020 report was Luxembourg, which found itself in the top 10, leaving Canada, Australia and the United Kingdom behind.

At the same time, World Happiness Report ranked the world’s Happiest Cities for the first time this year. While the dominance of Scandinavian cities stood out in the top 10, Finland’s capital Helsinki was chosen the happiest city in the world. Check out our list of universities where you can study. 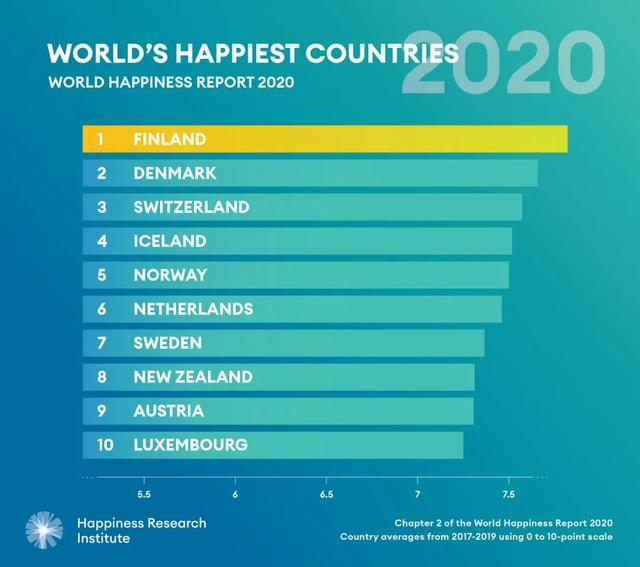 In the United Nations World Happiness Report 2020, Helsinki, the capital of Finland, was ranked first among the happiest cities in the world. At the same time, in the list where Finland ranks first among the happiest countries in the world, Helsinki has great success, especially in terms of student satisfaction. Because the city offers both international students and its citizens the essential elements of a good life: availability and quality of services, safety, cleanliness and nature, work-life balance, well-being and high living standards. You can take a look at what you wonder about student life in Helsinki in our article.

Aarhus is one of Denmark’s most historic cities, dating back to the 13th century. The city offers parks, green areas, botanical gardens, and also open-air theatre for students, and also makes the music enthusiasts feel vivid city life with a concert hall and museum. While the universities in the city offer both English and Danish undergraduate and overseas master programs, fields such as business, engineering and creative arts are among the most preferred.

Wellington, New Zealand’s safe, creative and friendly capital city, offers great reasons to study abroad for international students from all over the world. The city is one of the 20 safest cities in the world. While studying, Wellington offers a quality of life where teaches loving and enjoying life by presenting live events, art performance and breaks on the waterfront for students and it is also home to some of the best educational institutions in the world. Art, gastronomy, theater, music or dance… Wellington is a great city with universities and internships and job opportunities at world-leading creative companies to bring out and inspire your creativity.

Switzerland ranked third on the World Happiness Report this year, leaving Norway and Iceland behind. Zurich, the country’s educational center, is among the happiest student cities in the top 10. As well as being Switzerland’s largest city, Zurich is one of the world’s major financial centers, as it is home to the headquarters of many international companies, it is popular with students due to its abundant career options and high living standards. Founded around Lake Zurich, the city offers great opportunities to explore with its historical beauties and fascinating mountain landscapes. You can learn about student life in Zurich from our article.

Copenhagen, the capital of Denmark, is located in the heart of Scandinavia. Fascinating international students from all over the world with its modern and cosmopolitan structure, the city is a famous attraction center with its amusement parks, lush green areas, budget-friendly restaurants, high quality of life and low crime rates. It offers a convenient academic environment for students as there are many universities in the city where you can study.

The city of Bergen, chosen by about 30 thousand students to study, appears as the industrial and commercial center of Norway. The city attracts international students, especially for aquaculture, maritime, finance, offshore oil technology and higher education. Bergen also offers a vibrant city life with music, film festivals and active cultural events at all times of the year, while waiting for you in a number of volunteer organizations that you can participate in.

The capital city Oslo, Norway’s economic and political center, is quite popular for the banking and maritime industries. Although Oslo is at the top of the list of the most expensive cities in the world, nevertheless free education in Norway will allow you to balance your budget. Museums, galleries, music venues, festivals and cultural events that often take place throughout the year, located in the city center, where the richest people live in the country, give you great options.

Tel Aviv, Israel’s second largest city, is a unique metropolis with its young population and cultural activities that you will encounter at all hours of the day and night. The city, which has a coast to the Mediterranean, offers numerous alternatives to students while studying with its beautiful beaches. Tel Aviv has gained a reputation for technological research and innovation in recent years. Even seen as the Silicon Valley of the Middle East, the city draws attention with its research institutions and R&D investments.

Stockholm, the capital of Sweden, stands out for its high quality of life, rich culture and heritage. Offering a friendly atmosphere for students, the city offers many alternatives to explore the vibrant nightlife and cafes. Built on 14 islands connected by 57 bridges, Stockholm has a unique environment with its medieval buildings, cobblestone streets, museums and art galleries.  Sweden who comes to mind when it’s about the innovation and creativity in nowadays and Its city Stockholm who has the biggest potential for these fields, you can have some information from our article about student life in Stockholm.

Brisbane, the third largest city in Australia with a population of more than 2 million, also stands out with its three major universities in the world rankings. Brisbane, which has grown rapidly in recent years, has found itself among the happiest cities in the world, while the stunning beaches, sunny climate, and cosmopolitan city center full of culture and art have a big part in this as in other Australian cities.